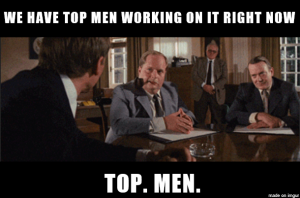 There was a great deal of news this past week about President Trump’s audacious disregard for the advice and warnings from his own intelligence community experts.

But I think there’s one shocking aspect — perhaps a larger story — that’s gone virtually unreported. It appears that anonymous intelligence officials are executing an operation against the sitting commander in chief. It might not qualify as all-out mutiny, but it’s also not all that far from one.