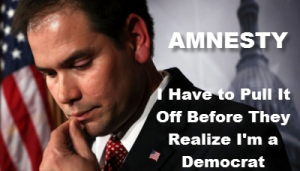 UPDATE: The petition site is now showing that this petition is supported by the Democratic Congressional Campaign Committee. While I agree with the sentiment of replacing Marco Rubio, I believe that you should know who is tied to this petition. I was not aware of this at the time of the article.

Earlier in the week, we told you how Arizona has had it with Senators John McCain and Jeff Flake over their persistent push of the Senate’s amnesty bill and began petitions to recall them.

Well it looks like the people of Florida have had their fill of Senator Marco Rubio. A petition has been set up to recall the Florida Senator following his vote on Monday concerning the Senate’s amnesty bill.