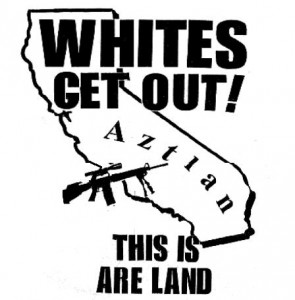 AZBD News: This is how the reconquista works. Flood a state with illegal aliens and push a leftist America hating agenda. Give the illegal aliens voting rights and elect traitors who hate their own country. Then open the flood gates to allow even more illegal aliens in. You are watching the transformation of the state of California into the Peoples Republic of Kalifornistan. Lets just hope California votes to secede from the union and we let them go peacefully.

According to the Los Angeles Times, while introducing Mexican President Enrique Peña Nieto, who said America is “the other Mexico,” Brown “spoke about the interwoven histories of Mexico and California.” He “nodded to the immigrants in the room, saying it didn’t matter if they had permission to be in the United States.”