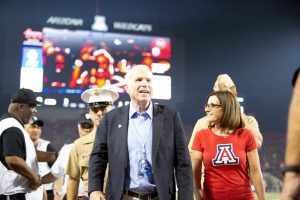 Failed Senate candidate and appointed Senator Martha McSally is now pushing for a new highway called I-11 to be built from the Arizona-Mexico border in Nogales AZ to Phoenix and up to Las Vegas. Eventually the entire highway will go from Mexico to Canada. This is nothing more than a resurrection of the “NAFTA Superhighway” that has long been the dream of Globalist tools such as former AZ Congressman (R-RINO) Jim Kolbe. A portion of the highway in Southern AZ will parallel I-19 and I-10 up to Casa Grande. The main argument for the highways path in Southern Arizona is to save 15 minutes off the drive for Mexican truckers by bypassing Tucson. The proposed path will run through ranches, farm land and residential neighborhoods and will require the use of eminent domain to acquire the land; but it’s all in the name of “Free Trade”. This is not surprising as McSally loves anything that supports open borders, including amnesty for illegal aliens.

We will also mention the Democrat Communists Sinema and Stanton from Arizona also support this bill. That shouldn’t surprise anyone but apparently some of the “R Team Good, D Team Bad” NPC’s out there can’t take anyone calling out the side that claims to support America First.

McCain is looking up and smiling at Martha for this.