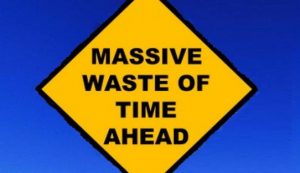 AZBD Note: This is just a waste of time. The Communists (Democrat party) will not give an inch. They play hardball and they don’t give a damn about the DACA kids, the unpaid government workers and they sure as hell don’t care about you or any other Americans. President Trump needs to end the screwing around and use his powers to declare an emergency and use the military’s budget to build the wall.

WASHINGTON (AP) — Submitting to mounting pressure amid growing disruption, President Donald Trump signed a bill Friday to reopen the government for three weeks, backing down from his demand that Congress give him money for his border wall before federal agencies get back to work.

Standing alone in the Rose Garden, Trump said he would sign legislation funding shuttered agencies until Feb. 15 and try again to persuade lawmakers to finance his long-sought wall. The deal he reached with congressional leaders contains no new money for the wall but ends the longest shutdown in U.S. history.