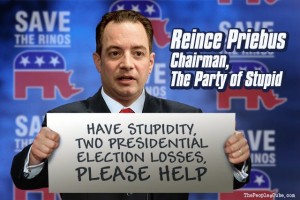 AZBD Note: In the past 7 months the GOP has:

Yet the leaders of “The Party of Stupid” somehow think a businessman who is speaking out for the American citizen is somehow going to do damage to the party’s image?

The head of the Republican National Committee, responding to demands from increasingly worried party leaders, spent nearly an hour Wednesday on the phone with Donald Trump, urging the presidential candidate to tone down his inflammatory comments about immigration that have infuriated a key election constituency.

The call from Chairman Reince Priebus, described by donors and consultants briefed on the conversation and confirmed by the RNC, underscores the extent to which Trump has gone from an embarrassment to a cause for serious alarm among top Republicans in Washington and nationwide.