Nevada Militia To Feds: ‘Control Our Borders, Not Our Ranchers’ 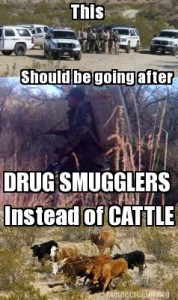 LAS VEGAS (CBS LAS VEGAS/AP) — The rural Nevada showdown between federal government officials and militia members protecting rancher Cliven Bundy has evolved into a battle of government “tyranny,” with many newly arriving militiamen rolling in to draw a line in the dirt about 70 miles northeast of Las Vegas.

Many with camouflage clothing and burly beards, the militiamen coming from as far as Montana are being welcomed by Bundy’s local family and friends who have already set up camp on the sun-scorched plot of land to protest the Bureau of Land Management’s controlling of the 150 miles of desert where Bundy says his family has ranched for decades – long before the BLM was created.