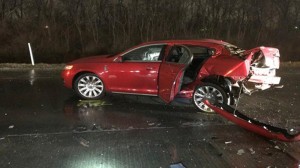 Colts Linebacker Edwin Jackson and his driver were allegedly killed by a drunk driving, previously deported illegal alien Sunday morning near Indianapolis. The suspect fled the scene on foot after crashing into their vehicle. Indiana State Police officers arrested the reported driver later that morning.

Police arrested a man who identified himself as Alex Cabrera Gonsales, a 37-year-old Mexican national, after he allegedly crashed his black Ford F-150 into a car parked along Interstate 70 near Indianapolis, according to a statement obtained from the Indiana State Police. The driver of the car, 54-year-old Jeffrey Monroe, and his passenger, 26-year-old Indianapolis Colts Linebacker Edwin Jackson, were both killed in the crash.