Only in Commiefornia: California Taxpayers to SUBSIDIZE Auto Insurance for Illegal Aliens 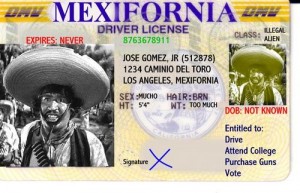 Californians are the most charitable people on Earth. Government is making sure that illegal aliens, criminals that break our laws every day, have low cost auto insurance, issued by the State (the taxpayers). This is subsidized by your taxes, money meant for education will instead be used to assure law breakers get a break on insurance, when they get their phony drivers licenses, which will be used—you know they will—to allow the illegal aliens to vote—illegally.

“State officials hope a new law that offers California driver’s licenses to immigrants in the country illegally will also encourage them to buy insurance.

To encourage the practice, the California Department of Insurance is aggressively marketing its Low Cost Auto Insurance program to the large pool of immigrants projected to seek licenses under the AB 60 law taking effect Jan. 1.”