Rubio Was Paid $3 Million To Betray His Supporters 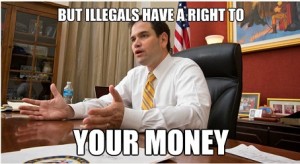 Objectively, the past few months have been extremely costly for Marco Rubio’s reputation.

He now has a record of directly and repeatedly lying to major Talk Show hosts about the contents of the Amnesty/Immigration Acceleration Bill, along the way turning in such shockingly weak performances from a narrowly technical point of view that professional observers began to question his intellectual capability and sagacity. Also of telling Spanish speakers a different story from the dumb Anglos.  And of course there is the matter of his total betrayal of his supporters.