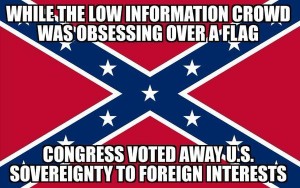 Congratulations to the Globalists and their henchmen in the Government Media Complex. Well played. You really do know how to leverage the power of the dumbed-down American public to ensure Congress can continue the destruction of America and ensure most people don’t even know it.

While the idiotic masses of 3rd grade level American history educated morons debated whether a piece of fabric was capable of being racist in a futile attempt to rationalize the actions of a madman; Congress sold America out to a global government structure run by foreign governments and corporations. Now America’s immigration policy is under the control of everyone but the American people. Don’t be surprised when you are laid off from your skilled or unskilled labor job and replaced by a foreign worker.

This whole thing was pushed by the idiots in the Republican party; the same treasonous idiots who killed America back in November by capitulating to the Democrats on Obama’s Amnesty are the ones who really pushed this. But wait, it gets better! We still don’t even know what they voted for because most of Congress didn’t even read the bill and the few that did are forbidden from speaking about it or risk jail time! Oh it has to be good for America then right?

If you’d like to read more about this act of treason the Center for Immigration Studies has a good article on what we do know. Unfortunately we’re going to find out the hard way the stuff we don’t know.

But look on the bright side. American Idols on TV tonight.